Choosing a Flag That Unites

This essay appeared in the January 29, 2004 edition of the International Herald Tribune.

President Bush took a shot at establishing some legacy beyond a permanent war on terror when he delivered his space vision speech at NASA headquarters on Wednesday, January 14th. Arrayed behind him were several pieces of NASA artwork depicting future moments in space exploration. 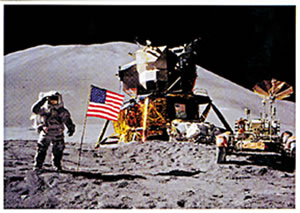 artistic choice is financial. President Bush advocated going back to the moon, establishing a permanent presence there, and only then venturing onward to Mars. The only possible way to pay for all that will be to allow this new space initiative to unfold as international collaboration rather than competition. But it’s difficult to see what motive either a citizen or a government of another country might have to invest their blood, tears, toil, and treasure in such an undertaking after seeing that singular piece of art. Why participate, if the decision has already been made that the very first astronaut will be representing only some rather than all of us?The one most directly behind his back showed a futuristic landing craft, a rocky red surface, a blue gray sky, and an astronaut … holding a pole with an American flag. Although such a landing is probably at least a quarter century away according to the Bush Administration’s own timetable, it has apparently already decided to plant in the soil of Planet Mars not a flag representing all the inhabitants of Planet Earth, but a flag of the United States.

In addition, there is an issue larger than simply sharing the expenses, a question of transcendent meaning. If there’s anything that should be done on behalf of all the Earth, it will be the first time a single human sets foot on a planet other than Earth. A 21st Century space program could generate a profound sense of human solidarity, a non-negotiable ethic of shared destiny, an intuition that we are all in the same boat on Spaceship Earth. It could cultivate wh at the great developmental psychologist Erik Erikson called an “all-human solidarity,” what the Princeton political scientist Robert C. Tucker called an “ethic of specieshood,” what Voltaire called the “party of humanity.”

The irony to the president’s backdrop is that almost every astronaut seems to experience such larger horizons. “The first day or so we all pointed to our countries,” said Saudi Arabian Sultan Bin Salman Al-Saud, himself from a region as polarized as any in the world.

Even Neil Armstrong himself experienced such a transnational epiphany. Interviewed in 1979 for Apollo 11’s tenth anniversary, he was asked how he felt as he saluted the American flag. “I suppose you’re thinking about pride and patriotism,” he replied. “But we didn’t have a strong nationalistic feeling at that time. We felt more that it was a venture of all mankind.””The third or fourth day we were pointing to our continents. By the fifth day we were aware of only one Earth.” Kalpana Chawla, born in India but raised to the heavens as an American, looked down from Columbia’s last voyage, but then decided to look up. “When you look out at the stars and galaxies,” she said just before she took her last breath, “you feel like you come not from any particular place, but from the solar system.”

The 27 fortunate souls who have ventured to lunar orbit all gazed upon our single, borderless, breathtaking planet, suspended among the blazing stars. They were perhaps the first humans to grasp that the Whole Earth was more than the sum of its parts, that it was something singularly deserving of a loyalty, an allegiance, a planetary patriotism.

So let us envision a slightly different scene than the one arrayed behind the president last Wednesday. The first passenger-bearing spacecraft has just set down on the Martian plain, near a gully in the long shadow of Olympus Mons. 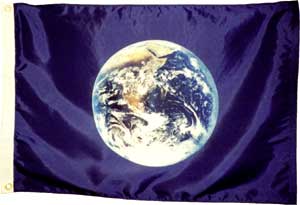 Five billion human souls sit spellbound, glued to television screens – the single greatest moment of shared human experience. The door opens, and the chosen one — whoever she may be – emerges into the Martian sunlight. Perhaps she is today a sophomore at a high school in Kansas, or Mississippi, or Ethiopia. She takes three cautious steps down the ladder, and then plants her boot squarely onto the surface of Planet Mars. And then she says: “That was one small step for one small woman. But it is one giant leap for the people of Planet Earth – of yesterday, today, and tomorrow. We come in peace, we come to explore, and we come to endure. And so today, here in the soil of Planet Mars, I plant the flag of Planet Earth.”

That single act could become no less than the defining moment of the 21st Century. It would be an infinitely precious gesture, one that would make all Earthlings feel part of the venture. If an artist’s rendition of that scene had been displayed behind the president when he made his announcement, it might have done more to bring our world together, in a stroke, than all the things George Bush has done in three short years to drive it apart.

Posted in Humanity's Future in Space